Tuesday afternoon 30 May is the long awaited moment; the official opening of the new giant panda enclosure 'Pandasia' at Ouwehands Zoo. The two giant pandas, who arrived in the Netherlands on 12 April amid great interest from the Dutch and foreign press, can be seen for the first time at Ouwehands Zoo during this special occasion. Following a 16-year period of consultations and preparations, the two pandas Xing Ya and Wu Wen, who were symbolically gifted to the Netherlands by China during the state visit of our Dutch Royal Couple in October 2015, can finally be admired by visitors from the day following the opening.

The Chinese ambassador, Mr Wu Ken, will conduct the official ceremonial opening of this unique project, together with Marcel Boekhoorn, the owner of Ouwehands Zoo, and a representative of the Dutch and Chinese government. Under the watchful eye of Chinese and Dutch dignitaries, press and guests, the doors to Pandasia will be officially opened.

Giant pandas can only be visited with online tickets

In order to ensure that a visit to Ouwehands Zoo and the giant pandas is an amazing experience, it will only be possible to visit the zoo with online tickets from the day after the official opening. Ticket sales have started as of today. For tickets, please visit www.ouwehand.nl/tickets.

This enclosure for giant pandas is part of a larger Asian project, which will house accommodation for a number of Asian species, such as small pandas and muntjacs. The whole area covers about 9,000 m², of which 3,400 m² is designated for the giant panda enclosure. The enclosure consists of two sections, a separate indoor and outdoor enclosure for the male and the female, several night accommodations, a nursery, a cold store for storing bamboo, a veterinary clinic and a keepers' area. In addition, a restaurant with a Chinese/Asian look will complete the project.

Pandasia is built in traditional Chinese style. The project consists of two stunning Chinese buildings, which are connected to each other by a wooden bridge. The roof and outer wall structures were made in China using traditional methods and have been finished in authentic colours. The shape, structure, proportions, materials and colours of the buildings are all based on a Chinese temple.

The giant panda is an endangered species found only in the wild in China. At the last count, there were only around 1,850 giant pandas living in the wild. By signing the cooperation agreement with the Chinese Wildlife Conservation Association, Ouwehands Zoo has committed itself to participation in an extensive nature conservation project, with the objective of protecting giant pandas in the wild. Besides the arrival of the giant pandas in Rhenen, Ouwehands Zoo will make a substantial financial contribution each year to support nature-protection activities in China. 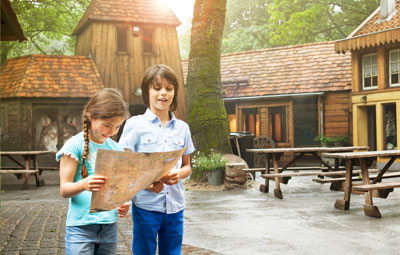 BUY TICKETS ONLINE AT A DISCOUNT!

Buy tickets quickly and easily online from the ticket shop and get a € 1,00 discount. With these online tickets, you can skip the queue at the entrance and walk straight through to the ticket control. You don't need to print the tickets, as they can simply be scanned from your mobile phone or tablet. These online tickets provide access to the entire zoo, so you can admire the giant pandas, too. Of course, it is also possible to purchase your tickets at the entrance. We hope to see you soon at Ouwehands Zoo!

Understood, do not show this message again